A trip is not complete unless you have stressed about using a public restroom on the way to your destination. Myriad questions about its hygiene, kind of services, and maintenance will plague your mind. It is interesting how the concerns that worry us today in 2019 were the same concerns that played an essential role in the development of public restrooms many eons ago. The history of public washrooms is a story replete with anecdotes, fears that restricted the acceptance of these spaces, necessities that made it a compulsion to use, and diseases that gave way to sanitation practices. As we are staring at a future with sensors and AI in the washrooms, some of the curious minds at Zan decided to look at how we got here, which turned into a 3-part blog series, hope you enjoy.

As early as 2800 B.C in the Mohenjo-Daro civilization, there was ample evidence of well-structured public washrooms and bathing spaces, all connected to a sewer system. In the Indus valley civilization, there have been traces of bathrooms for public use with functional sewer systems and flush toilets. Greek Islands showed evidence of bathtubs connected to plumbing and separate hot and cold water supplies in 1500 B.C.

The most unusual but widespread use of baths for the public became rampant during the reign of the Roman Empire. They were the first to introduce thermal baths as a means to socialize and even discuss politics. Their toilets too became places to mingle and were in full public view. These public washrooms consisted of marble seats with an opening and a drainage system that ran beneath it. Some of these latrines could accommodate more than fifty people at a time, all in full public view. During this period the people also carried a chamber pot if they were at dinners or social gatherings. An odd practice during this time was the use of the sponge stick to clean themselves. There was no paper or water, and this served as the best replacement without having to use their hands. Though in full public view, these places were mostly men-centric, and women had separate bath houses/latrines, or they carried a chamber pot with them.

Such was the influence of these structures and the rule of the Roman Empire that they carried over into the medieval times. Though they had disappeared from the public sphere in the western nations, most Middle Eastern countries had public baths popularly called Hammams, and some of them are present in modern-day Syria and Iran. During the Renaissance period, the bubonic plague hit hard, and fears of the disease spreading prompted the then King of England to do away with public baths. Though the public toilets remained in use, they were frequented mainly by the lower classes. The castles had private toilets called ‘garderobes’ consisting of a seat with a hole dropping into a moat. It was different for the Royals. A servant brought a chamber pot with a stool to them and took it back when they were done. This convenience prevented Queen Elizabeth I from accepting the flushed toilet invented by her Godson in 1596.

The use of flush toilets became widespread after Alexander Cummings invented the S-trap in 1775. Though it was the need of the hour, it posed severe problems like disposing of waste, removing foul odor and an efficient sewage treatment system. Ancient civilizations were ahead of their times and had a well-constructed drainage system, but it took the western world time to get it right finally. Being governed mainly by the notion of privacy, people realized that right sanitary conditions became an urgent need and privacy could take a backseat. It was only in the late 19th century with the discovery of germs and the advancement in understanding of the causes of diseases that the importance of an adequate sewer system gained prominence. People understood the importance of health and hygiene. The use of soap became necessary. The fear of something dirty, unknown microbes became the talking point and the driving force in the development of better sanitation systems.

With the evidence of Harappan and Indus civilizations being advanced, having a well-developed sanitation system, even reported to have flushed toilets, did the development stop after these civilizations? Did they put the drive in reverse gear when they needed to go forward? It took several centuries to realize the need of the public toilets, to develop spaces that can be private, safe, and hygienic at the same time. People rejected changes, were wary of them, but eventually, it became a part of their daily routine. What did not change was the reason. The fear of dirt, fear of germs, of unknown microbes lingers on in the minds even today. Though hygiene played a vital role in the evolution of public bathrooms, privacy was not an issue until the late nineteenth century.

During the industrial revolution, women started to work outside their homes and in large numbers. Economic prosperity coupled with the need for modesty for women outside their home gave rise to the development of public bathrooms with enclosed spaces and gender-segregated bathrooms too. Public bathrooms had evolved to include closed areas, but it became center stage once it involved women and their need to use the bathroom outside their home. The growth of public restrooms created an avenue for an industry that had to perform the daunting task of keeping these facilities clean 24/7. How were these new public structures managed? Has the sector evolved at a rapid pace? Did facility management exist back then? These questions need deep delving into the topic to fully understand the complex working, and how it came to be the industry, it is today. 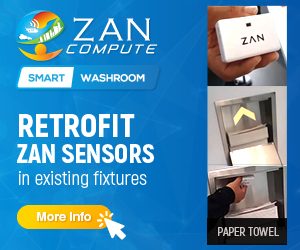